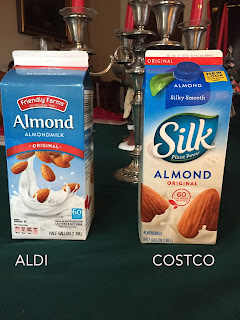 My local Aldi is on my way to Costco; I'm not sure what drew me inside the first time. I think I read an article somewhere about the culture (shopping carts are loaned for .25 cents?  Bags cost money?) Or, it's possible I came across a vegan blog about how to shop there. Because. Vegan. (You think I'm kidding.)

The first product that caused me to stop at Aldi, as a regular, not a tourist, was eggs.  My local Costco stopped selling eggs in quantities less than 2 dozen.  (Did I mention? Vegan?)  A dozen eggs at Aldi was .69 cents, and Jacques could have fresher eggs.  So a started to swing by for eggs.

Near the eggs, Aldi sells half-gallon Friendly Farms Almond milk for $1.99. As part of the previously mentioned veganism, I'm drinking nut milk.  Which, of course, I've been buying from Costco.  My Costco sells Silk, three half gallons, for $7.59.  I was convinced the Costco product must be better, because it cost more,  but I decided to try the Aldi's as an experiment.  Seemed OK, but I doubted my judgement, so I did a blind taste test on Jacques and myself.  Let me just put it out there that Jacques is not a big nut milk person, but he couldn't tell the difference and neither could I. Nutritional information looked identical.

As part of my research for this column, I read a blog from 2014 that said Aldi Friendly Farms nut milk contained carrageenan, but that is not on the ingredients list of either the Friendly Farms Nut Milk or the Silk Nut Milk from Costco at this time.

Aldi has been a learning curve. after about 7 visits, I found myself returning as a regular, knowing some of the regulars' behaviors, like not getting a new cart from the shopping cart rack.  You hand a quarter to a finished shopper who is on her way to the rack.  When you're done, you accept 25 cents from a newcomer. And remember to take your own bags inside, particularly when it's this cold. 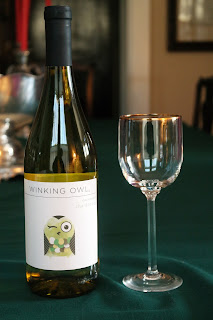 My friend's daughter, Sarah (named changed to protects privacy), wanted a group of us grandmothers to test this $3.00 Aldi, Winking Owl chardonnay.  Sarah is planning to serve it at an open house, but the cheap price frightens her.

We found it perfectly acceptable.

Personally, as someone who has suffered through bad chardonnay in restaurants, I thought it was pretty good. I've stopped ordering wine in restaurants because I am often served something, regardless of cost, that is just plain, well, to put it politely, swill.

Now, when I eat out, I order a cocktail, or two.  Much more likely to get something pleasurably drinkable.

Back to Winking Owl, we thought it was fine, and the label was cute.