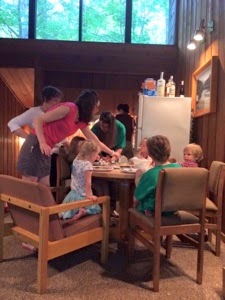 One stop shopping at Costco made the weekend more fun. The Costco pool noodles were such a hit that my Brooklyn family thought about trying to take them home on the plane. 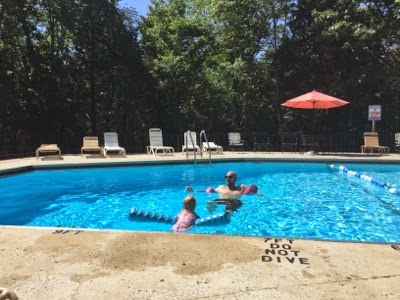 I purchased the Keurig, 2.0, currently on sale at the Nashville Costco; the Keurig allowed everyone to have coffee at will, which was perfect as we had East Coast and Central time risers.  The Keurig came with sample packets, so our different coffee preferences were met.

Unfortunately, we had one exception to our one stop shop:  we had to get marshmellows and graham crackers for s'mores at a regular old supermarket. 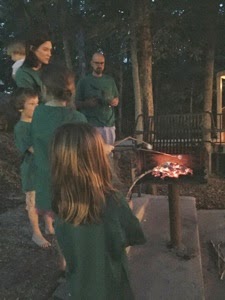 But, of course, the Hershey bars came from Costco! 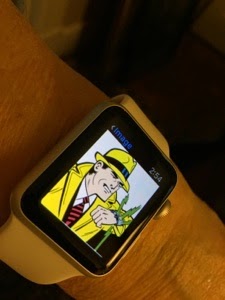 I've had my Aapple watch for almost a month, and I like it.  Because I'm of a certain age, I was used to wearing a watch and that part is not new, (for some reviewers even wearing a watch is new) but the extra functions of the apple watch are new.
My favorite function so far is Apple pay. I have never figured out Apple pay on my iPhone, but, on the watch, Apple pay is simple and much faster than cash or credit. I just hold the watch over the scanner and click a side button twice. Cashiers usually look startled at how simple it is. I've read that Apple is asking retailers that sell Apple products to take Apple pay, and I very much wish Costco would.
Texting is the other function I like. You won't like watch texting If you don't like being constantly accessible, texts come on the watch and the natural tendency is to respond immediately.  The reply option on the watch includes canned responses, emojis and voice recognition. As other reviewers have said, voice recognition works much better on the watch than on the Apple phone, so it's possible to text efficiently from the watch.
To me, the exercise interface is not as good as the Fitbit.  I only checked the steps on the Fitbit and that measurement is slightly hidden on the watch.
On the plus side, the watch is much less creepy than Google Glass, which I had, tried, and passed on to my son.
So far, I'm an Apple watch user, haven't felt like leaving it at home yet.
By Unknown at 10:49 AM No comments: 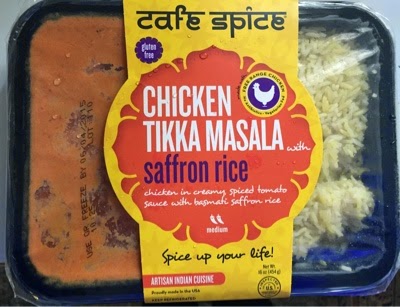 This Cafe Spice Chicken Tikka Masala is seriously good-not just the chicken masala, but the rice as well.

I recently ate at Chauhan Ale and Masala House in Nashville, a wonderful new restaurant by Maneet Chauhan, and one of the best things was the rice. I kept exclaiming: this rice is great! this rice is great! how do people make this rice? But I was ignored, (maybe because by then we had each had a couple of the fabulous house cocktails).

Anyway, Cafe Spice rice has the same taste and consistency.

Cafe Spice claims to be restaurant quality, and I agree it is very, very good, better than some of Nashville's Indian restaurants. The tikka masala was so good that, if Costco carries only the tikka masala, I may have to look for other Cafe Spice products in the regular supermarket (shudder).

One package fed two of us.  Spiciness is medium and might be too hot for most children.

I did not see this product today (May 5, 2015) at my local Nashville Costco, hopefully it will be there soon. I was sent the product for review, but wasn't compensated otherwise.

Phones at the Costco Kiosk 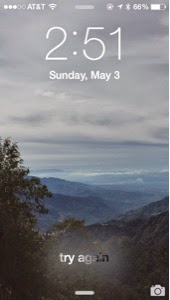 So maybe not everything is better from Costco. Perhaps buying a phone has gotten so complicated that Costco is just not the way to go. I have AT&T with an iPhone, and, for my last two phone upgrades, I wanted to buy from Costco, but I just couldn't make it work.
Phone plans are so complicated now that  the representatives at the Costco kiosks can't understand all the features of all the plans of all the companies they represent.  I've been told point blank that Costco couldn't get AT&T to do something that I was able to get the AT&T store to do easily. I don't know if AT&T doesn't offer Costco customers the same benefits through the kiosks that they offer through their stores, but I suspect that they do not.
Also, the new advertising campaign with the friendly spokesperson seems to be more than just lip service. Service was noticeably improved at the AT&T store I visited.
By Unknown at 8:47 PM 1 comment: