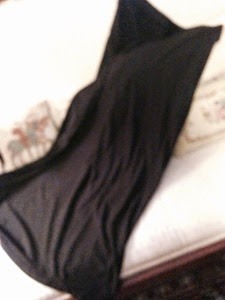 I need an outfit for a formal dinner in August, but I want something I will wear more than once.  Instead of a long formal, I think I can squeek by with a cocktail dress.  I ordered a little black dress from Nordstrom on-line, $150; uninspiring in person, I had to return it.  Rather than mail it back, I returned it to the store here, where the Nordstrom sales person found me a cute little black dress for $895.  Hmmm. No.

I also needed a swimsuit, and, at Nordstrom, in the swim department, I noticed long black skirts with elastic waistbands being sold as "dresses/skirts" for around $50.  Took me a second, but I realized they were designed to be pulled up and worn either as strapless bathing suit cover-ups or as skirts over a suit.  Hummm.
I remembered seeing something similar at Costco.

These matti m skirts at Costco are very similar, but sell for $16.99.