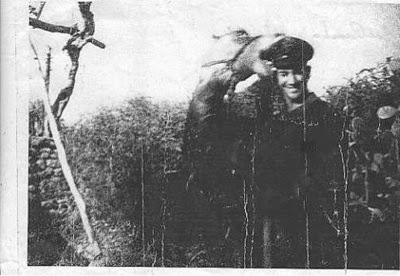 I received an out of the blue opportunity.

Because I attended Food Blog South, I was invited to develop a marinade using Four Roses Bourbon to celebrate May, Barbecue Month. They sent me the bourbon, and I set to work. (I'll definitely make it out of Costco ingredients.)

But, first, I have to tell you, Four Roses Bourbon has a deep and abiding history in my family. The picture is my father in Cairo. When my father was in Tobruk, during WWII, he was living in a tent and flying missions out of a dirt runway. He was also the youngest new lieutenant and assigned to develop the Officer's Club.

They let him have a tent and some money and sent him to Cairo for supplies. He was able to turn up some Johnny Walker Black and some Four Roses. He and some friends constructed the bar out of bottles laid on their sides, which looked pretty good, my dad says.  They proceeded to drink and fly.

Years later, my dad met an old friend from those days. He said, "Did you write Catch 22?"  And his friend said, "No, I thought you did."

My Four Roses experience will be in a separate post.