Rolf and Daughters' Carrot Marmalade; a way to use up Costco carrots? 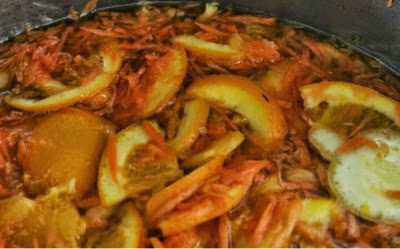 Last night my friends and I went out to eat at Rolf and Daughters, a new restaurant in Nashville's Germantown.

Rolf and Daughters was named one of the best new restaurants of 2013 by Bon Appetit Magazine.  We loved it: the casual vibe, the excellent and handsome waiter, the flavorful homemade pasta -a fantasy local bistro.

One of the biggest revelations to me was the carrot marmalade served with the chicken liver appetizer.  (You know who has LOTS of carrots; but marmalade is something I never considered.)

It turns out carrot marmalade is a "thing". I tried using a carrot marmalade recipe that I found through Google. Unfortunately, the recipe I tried ended up being just like any citrus marmalade, less about carrots than the citrus flavor. I'm going to try again using only carrots and make something more like a carrot jam.
By Unknown at 11:15 AM