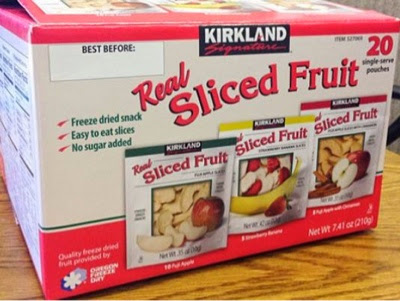 In case you missed it, and, if you purchased it, Costco has probably already informed you, but the Kirkland packages of freeze dried fruit have been recalled for potential salmonella contamination.

At this point none have been sickened, but the recall includes 60,000 cases, each of which includes 20 individual packets, so potentially over a million packets are involved.

Here's a link to an explanation of the recall by the FDA.

Google alerts lets me know what's happening with Costco, and the only thefts that are ever reported are from Bloomfield Hills, Michigan. Bloomfield Hills is a perfectly nice community in Michigan; I have a hard time believing that crime at that Costco is worse than elsewhere.  I'm guessing that Bloomfield Hills police get so little action that reporting on the Costco thefts is a major activity for them.

Most recently one man concealed candy under his coat and another tried to walk out with two televisions.
By Unknown at 2:01 PM