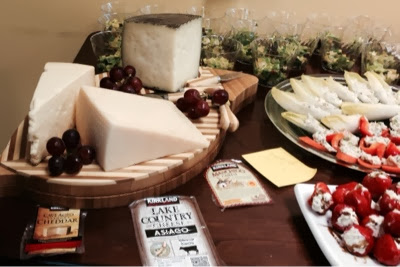 Nashville Food Bloggers met Sunday for a party, potluck and white elephant gift exchange. Fabulous cooks brought dishes from their kitchens.  While I can cook, I'm no Cook, so I decided to bring a side dish to compliment the food.

Over Christmas, Costco carried many appetizers.  I very much wanted to try the olive assortment, or some of the many charcuterie choices.  But when I visited my Costco this week, these items had disappeared.

For several months, I'd been considering the bamboo cheese tray with cheese cutters, now on sale for $9.97 at my Costco. I decided the party was a great excuse to purchase that. While some of the bloggers make their own feta and mozzarella,  I figured no one would be contributing hard cheeses. I chose Kirkland Cheddar, Asiago and Manchego.

The caved-aged Vermont cheddar was $11.99 a pound.

I paid $5.99 a pound for the Asiago. The packaging of the Asiago had a QR code which linked to a Costco website where I discovered that the milk producers for this Wisconsin cheese live a maximum of 51 miles from the plant.

The manchego was $7.99 a pound and is a product of Spain.

I brought leftovers home, which I froze.

Some love Asiago, but it's not my favorite.  I thought the manchego was very good. But the cheddar was excellent and deserved the most expensive price.
By Unknown at 9:24 PM