Recently I've  had to look up two words that kept popping into my mind about Costco. The first is hegemony, an old graduate student word that was always used pejoratively. The second is schadenfreude, not a word we admitted to in graduate school, but a word I learned somewhere along the way.
Hegemony implies cultural hegemony, uniformity of taste. Sometimes when I'm in a Costco far from home, I wonder about cultural hegemony.  But, whether I purchase at Kroger or Costco, my paper towels look the same.  I'm not throwing my support away from my local region by buying a better and cheaper paper towel at Costco. It's not clear to me that it's a plus for the regional economy for consumers to buy from a gigantic grocer rather than a gigantic box store.
In the past 10 years I've increased my support of local producers; I buy local produce and meat and local arts and crafts.
Schadenfreude, tomorrow. 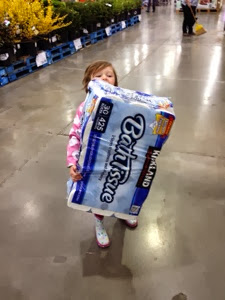