We traveled to Peoria, Illinois, for Henry's 4th birthday party. I counted three birthday cakes with candles, one at The Fish House Restaurant, one zucchini chocolate to use up garden zucchini, and one gluten-free to celebrate with Henry's friend Edward..
I'm glad the toys are back at Costco. We gave Henry the Tonka police car. (Costco had Tonka police helicopters, fire trucks, SWAT cars, and police cars.)

We chose the police car, but I'm not sure the car type made a difference to Henry. What was fun was that the car runs a short distance on its own; and the red and blue flashing lights and loud sirens are pretty exciting for a 4 year old. The large size is good for little hands.
Two cars would have been more fun than one, and might have prevented or eased some altercations over whether it was Henry's or Edward's turn to play with the car.

The car was amazingly hard to remove from the packaging, I guess this is necessary to keep the cars from becoming playthings in the stores. Multiple plastic ties keep it in the cardboard. You will need a scissors.

I hope the flashing lights and multiple sirens aren't too much for Henry's parents. Surely any battery wears down eventually. 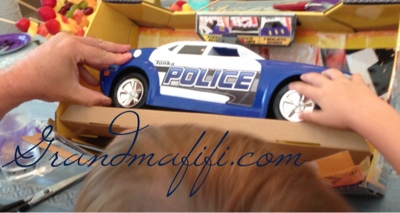