Admit it. Whoever developed smokeless cigarettes is brilliant.  I guess technology is at the point where anything can be miniaturized and mechanized.

At least one smoker I know is resistant to trying these.  I think he's choosing the devil he knows rather than the devil he doesn't.  So many new inventions turn out to have side effects worse than expected, I think he's waiting for more research.

The research isn't in, but some public health officials think electronic cigarettes are almost definitely better for you than the real thing.  While quitting entirely is best, health professionals believe that reduction of harm is better than nothing.  In other reduction of harm products, gum or patches have substituted for nicotine; in the case of electric cigarettes, a vapor is inhaled into the lungs. I understand not wanting to experiment with this.

But, I had pretty bad asthma as a child; and I wonder, if my mother, who smoked, had used smokeless cigarettes, would my asthma have been any different?

If you are interested in trying these as a consumer, the Costco product is probably not for you. What Costco sells is intended as a display for retail sales - an nJoy rotating stand with a variety of e-cigarette types, menthol, 3% and 5% solution; 27 packs for $139.99, with a suggested resale price of $7.99 each. 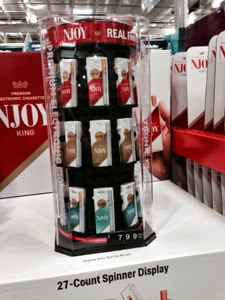