Mozzarella at Costco and Caprese Salad

Sometimes I'm amazed at all the things I don't know considering how long I've been around. For instance, I was going to make fun of the mozzarella cheese at Costco.  My Costco has four different kinds of mozzarella cheese, from $4.28 a pound to $12. And the $12 a pound stuff claimed to be both made from buffalo milk and imported from Italy?

I figured I better do a little research before making fun of an Italian cheese made from buffalo milk. I was wondering how they got American bison milk all the way over to Italy, and I was picturing a complicated shipping process, but it turns out that the buffalo milk in the cheese is from Italian buffa, a species of water buffalo unique to Italy. I  found this article in the New York Times.

According to Wikipedia, there are about 250,000 of these buffa around Naples, and their milk is used to make not only mozzarella, but ricotta and other cheeses. Now, I'm anxious to try it, and wish I hadn't purchased the less expensive, but still very good, cheap mozzarella at Costco.

I love hot mozzarella on pizza and in pasta dishes.  I don't care for it cold in caprese salad unless the tomatoes are fresh from the garden, but since my tomatoes finally came in this week (September?), I have made caprese salad, and we enjoyed it. 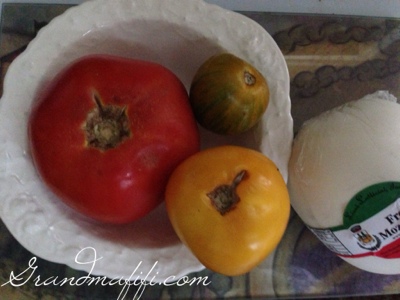