I had never purchased the Costco Almond Bark, located back by the bakery. I've been relying on the Almond Cherry Clusters for my chocolate fix. But I've seen so many references to the bark, I decided I had to try it for myself.
The bark comes in 2 lb. containers, the same size as the cherry clusters, and prices are roughly equivalent (around $5.00 a pound), so it's a matter of taste which you prefer. 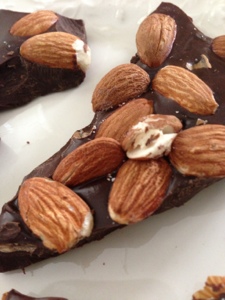