Every fall, Costco has lovely large chrysanthemums; and I usually get two for the front steps. The price is much better than comparable plants in nurseries. (Price varies by store, so don't count on getting the price in the photo at your Costco.)


I never know what to do with these after they've finished blooming. I planted last year's in the garden, they're green and healthy, but they're not going to bloom. Maybe I'll dig them up and move them to a sunnier spot.

The dead ones from two years ago became a camouflage thicket for the birds; that might be best. 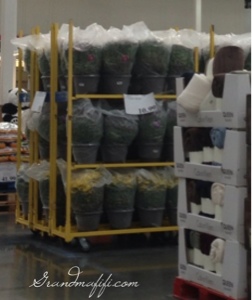