Having recently been an extra in a TV show filming here in Nashville, I had a chance to observe TV people at work.

We were filming outside, in an area with some mud, and the ultra-sophisticated director and other women in the crew were wearing patterned rubber boots. I remembered seeing these last fall in Costco and wondering who wore them.
Last week, I went Costco shopping with my visiting daughter.  She commutes from Brooklyn to Manhattan every day and walks to her subway stop; she decided she needed these. I've worn boots once or twice in the last 15 years, so I guess I don't. They're pretty cute though.
Boots are by The Sak and cost about $20.00 at Costco, half the cost of similar boots on-line. 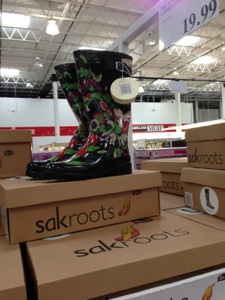