For various reasons, we've used a lot of band-aids recently, leaving us with the band-aid dregs - tiny rectangles and rounds.  Having compared prices the last time I bought band-aids, I wanted to purchase at Costco.

At Nashville Costco, I found a three-case pack for $12.00, but the contents list was very confusing. I never did figure it out, but bought them anyway. After opening, I was able to ascertain that each box contained 54 band-aids of various sizes (no useless tiny ones) plus three little squeeze packs of Neosporin - so over 162 in all, or over $.07 cents a band-aid.

After checking at the local supermarket, this didn't seem like such a good deal. I could buy 100 band-aids there for $5.00 or $.05 cents each.  The pack at Costco had more shapes, a hard plastic container, and small Neosporin packs.

I could have saved money with the supermarket choice; but, since the paper band-aid boxes here always end up coming apart and scattering band-aids everywhere, I do like having the plastic container.

My daughter took one of the three containers home to Brooklyn. If you can divvy them up, or if you have need for the hard plastic cases, this might be a good buy for you. 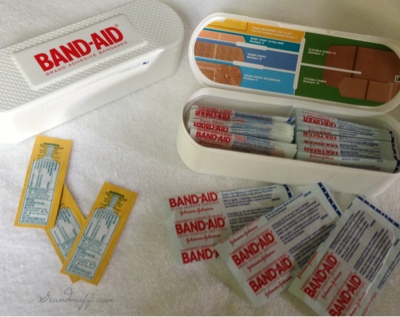