There goes my book deal.

This is not a post about Costco, it's about the "Granny" aspect of the blog.

I got in a twitter altercation yesterday. It's my first one, and I blame Ronni Bennett, from the blog, Time Goes By; I had recently read her blog post about the media and ageism.

A young man, whose twitter bio says he's managing editor of a major Publishing Group, and, who, I'm sure, is a nice person, made this comment after calling Peggy Noonan a crone.

"May I safely use "crone" to describe, say, Peggy Noonan, if I would just as naturally use "codger" for John McCain?"

Which he followed up with "As long as we're discussing La Noonan, ask them what they think of "half in the bag blithering old hag."

To which I replied. "Same as categorizing someone you don't like by disparaging their color."

To which he replied:  "I'm going to very much have to differ with you on that.  That level of oversensitivity guts the language."

He said:  "If they're Peggy Noonan, Dorothy Rabinowitz or John McCain, you bet." and added, "I'm done with this conversation."

Why can't people hear themselves?  I feel sure he would not think it acceptable to use negative adjectives about color or sexual orientation to denigrate people with whom he disagreed, but that consideration doesn't extend to old people.
I don't agree that elders objecting to negative, pejorative slang are oversensitive or that preferring that people don't namecall using words like codger, crone and hag is "gutting the language". 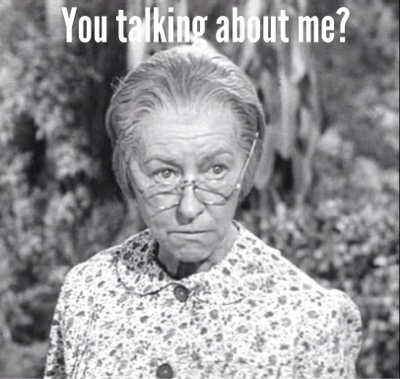