I've decided people don't really like pharmacists.  I come to this conclusion reluctantly, I was going to go off on modern pharmacists comparing them to their much beloved brethren of yore. They knew where everything was in their immaculate stores.  But, when I started to think of well-known and loved fictional pharmacists, I couldn't come up with any.

The first pharmacist I thought of was Mr. Gower, the pharmacist from It's a Wonderful Life.  Without George Bailey to catch his prescription error, we all know how that would have turned out. 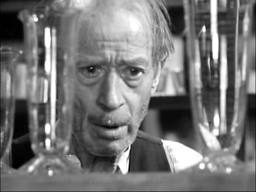 Then, I remembered the creepy Monsieur Homais from Madame Bovary; he epitomized the worst of the bourgeoisie. I began to question my assumption that pharmacists used to be well-loved. 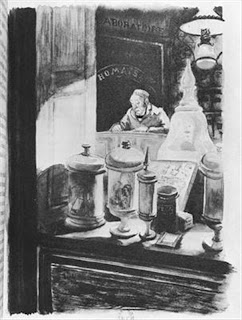 Bob maintains there is a good pharmacist in The Natural and that Patrick Cleburne, Civil War General, was a pharmacist and a good guy, but there are always exceptions.

Maybe pharmacists haven't changed as much as I thought. Which leads me to my complaint.
Pharmacists are druggists, meaning they should know what drugs they have in the store where they work.  Just because the drug is not behind a little glass wall does not mean that one should say, "If we have it, it would be down that aisle; if it's not there, we don't have it."

I looked there. That's why I'm asking you.

Look it up, pharmacist, or get one of your 'leventy million helpers back there to look it up.  If no one in pharmacy knows how to look up stock in the store, ask for retraining.