Crabby, Asthmatic, but Trying to Empathize about Your "Service Animal"

I started blogging because I was inspired by Ronni Bennett from Time Goes By.  She advocates blogging as a great hobby for older people, and I agree.  She calls herself Crabby Old Lady, and, sometimes, she is, but mostly she's not.

I think that mostly, I'm not a Crabby Old Lady, but sometimes, I am.

When I was little I had terrible asthma, I've ended up at the emergency room more than once as an adult because I needed emergency asthma intervention.  I'm very allergic to animals.  Three times recently I've been in Costco when people were accompanied by phony "service animals".  Now, I'm not someone who can claim to love animals. I'm not an animal person.

But I particularly don't want to be around over-groomed animals in bows trotting around my grocery store, pretending to be "wink, wink" service animals.

Who are these people accompanying these obviously spoiled pets?  The people actually look pretty raggedy compared to the fussy little dogs.

I began to wonder: what could make you think taking your dog to Costco was a good idea? Maybe these folks aren't just stopping at Costco on their way home from sashaying their pet around PetSmart. Maybe these people are afraid to leave their houses without their pet, maybe they are severely agoraphobic!?  Maybe they couldn't ever even visit Costco unless they brought their dog!

I'm trying to reframe this entire thing. Now I feel guilty for being so judgmental. 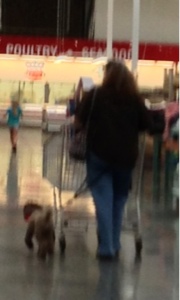 Still don't like pets in the store though.
By Unknown at 7:08 AM