Within the past year, we've discovered Costco Kirkland deli meats in the cold cases, back with the bacon and shrimp.  This thinly-sliced lunch meat comes in three packages of 14 ounces each. We freeze two packs and keep one open.

Bob likes the smoked honey ham and makes ham and cheese sandwiches for his evening snack.  I use chopped ham in omelets and on pizzas.

In addition to the sliced ham, Costco uses this style packaging for both sliced deli turkey and a variety pack that includes one container each of chicken, roast beef, and ham.

We like this "shaved deli thin" style better than the thick slices that we used to buy. Sandwiches use less meat, which seems healthier.

I took this picture, and realized later that I should have tried to get rid of those shadows. Too late; I already ate the sandwich. 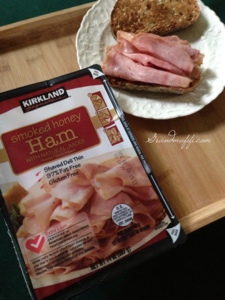