I had some sympathy for Costco in the Tiffany setting controversy.  After all, a Tiffany setting IS a well known style of ring that many jewelers make.  It seems pretty dumb to use the name Tiffany in advertising, when you mean a setting style and not actual Tiffany, but I gave Costco the benefit of the doubt on that one.

It is harder to understand how Costco could use a photo in an email ad of a product that was never actually for sale at Costco.  This is what Michael Kors is claiming in a current law suit filed in federal court in New York which accuses Costco of false advertising.  Michael Kors, the fashion retailer, contends that it has never sold handbags to Costco and that Costco's advertisement uses an illegal "bait and switch" technique by using a photo of a product that is not available..

Below is part of an email that I received last spring from Costco advertising potential Mother's Day Gifts. I believe this is the email that is the focus of the Michael Kors lawsuit. 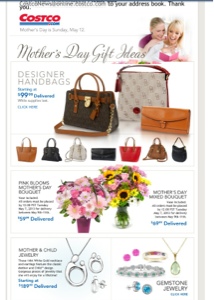 It clearly shows a Michael Kors bag.
By Unknown at 7:33 AM