Kimberly, at the Addicted to Costco blog, has an interesting post about Costco's paper towels and the campaign to make them smaller for the environment.  I'm not going to weigh in on this. :x

But I did find a Costco participating in the green movement.  The new Knoxville, Tennessee, Costco is on a greenway.  The photo shows the bike racks.  For me, this conjures up pictures of bicyclists trying to get the paper towels home.

In May of 2011, the town manager of Farragut, the suburb where the Knoxville Costco was to be located said in a WBIR, Channel 10, interview:

"In Farragut, we require greenway connections for all of our new developments and so it's actually going to be great," Farragut Town Administrator David Smoak explained. "We're going to have a greenway connection from Lovell Road around the backside of the development into Kingston Pike so pedestrians don't have to go down to that busy intersection at the corner of Lovell and Kingston Pike."

This was my first time in the Knoxville store, and I will definitely be stopping again.  It's a easy reach off Interstate 40 on exit 374. Gas prices were fabulous. 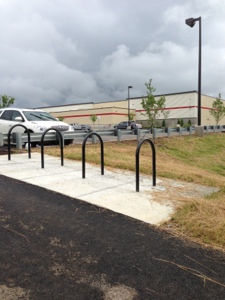