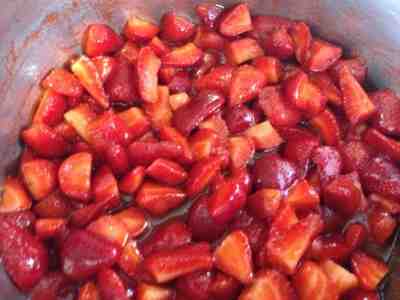 1. I had many more strawberries than I realized. My idea that I was going to make only one batch of jam was wrong. I'm going to have to figure out something for all these berries -maybe ice cream, but my ice cream maker is pretty old, I saw nice ones at Costco last week and pretty sure I need one.

2. My 93 year old Dad announced that he doesn't like strawberry jam, he only likes strawberry preserves with whole berries.  The recipe called for mashed berries.  My Dad specifically said no mashed berries.  I compromised by using halved and quartered berries. This threw all the measurements off, so I had to estimate.  (I was trying so hard to be good and follow the recipe.)

3. The recipe specified careful solid measurement (scraping off the top with a knife). I didn't have a solid metal measuring cup - only a glass cup measure, which didn't matter that much, because the berry measurement was already off.

4. When I bought canning supplies this year, I thought, "you only need the flat lids, not the screw tops".  Wrong. I finally found enough screw tops scattered around the kitchen, but it wasn't easy.
I wish my Costco carried canning supplies, I think I've seen jars in a Costco either in SC, Michigan or New York, but I can't remember where.

What went right:
the jam is pretty good. 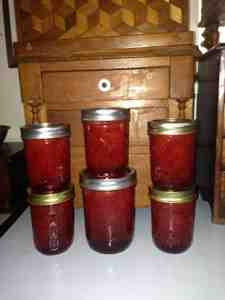