Bob and I used to have a bag of microwave popcorn every night. We bought them in large boxes from Costco and thought it was a reasonably healthy snack. But I started to become concerned about the chemicals used in the bags, and we tried regular popcorn.

Once we tried it, we liked it better than microwaved because we could control the salt and fat.

But I had trouble finding a reliable supply. I found a good brand and then the grocery store stopped carrying it. Some brands I tried had small or unpopped kernels. Many grocery stores barely carry regular popcorn at all.

When I saw the popcorn in the photo at a Michigan Costco, I had to have it. It's great. Large kernels. Pops fully. Only one ingredient: popcorn.

I have never seen this in my Tennessee Costco, but I'm hoping. 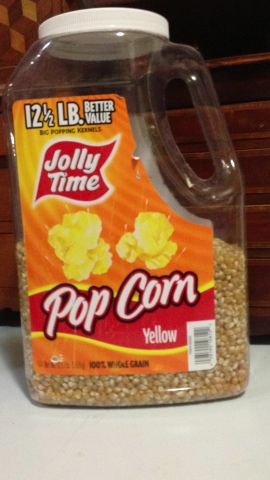